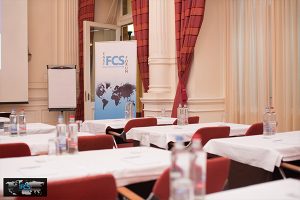 EAST Financial Crime & Security (FCS) Events are user-driven events aimed at professionals involved with identifying, preventing and detecting security risks and crime relating to ATMs and other self-service terminals from a wide range of organisations, including banks and police forces.

This interactive event focused on two key outputs of EAST EGAF – guidelines regarding logical attacks on ATMs and standardised Fraud Definitions.  An introduction to the Group was followed by a presentation of the latest EAST Fraud Statistics (H1 2018).  A session then focused on the evolution of cash-out /jackpotting attacks, followed by a session highlighting Guidelines on how to counter them.  A perspective on card shimming in the UK was then be given, followed by a session on the importance of standardising fraud definitions.

This seminar was sponsored by:

This interactive event followed the basic structure of EAST EGAP Member meetings.  An introduction to the Group was followed by presentation of the latest EAST Physical Attack Statistics (H1 2018).  Then two sessions focused on the ATM physical attack situation in Europe – a high level overview from Europol, followed by Law Enforcement updates from five key European markets.  A networking break was followed by a session on the steps taken in Italy to counter ATM explosive attacks (gas and solid), and the event concluded with a Q&A session on all attack types and counter-measures.

This seminar was sponsored by: